Monster Mesh try to give back to local organisations and charities wherever possible, and one charity which they have helped for a number of years now is Supergood bikers for Autism. Mark, the founder of Monster Mesh is an old friend of Paul Brackstone who started the charity back in 2016. 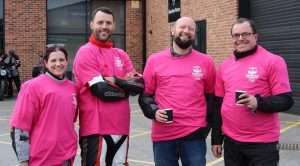 Autism Supergood was borne out of a fathers’ love for his son. After moving with the family up North, Paul gave up his career to care for his son who was diagnosed with autism in 2012.

Alongside caring for his son, Paul found comfort in going out for rides on his motorcycle when he needed to clear his head & to spend time with his son who would pillion. After an accident on his bike forced him to take time off, Paul had the time to focus on what matters most and combine his love of bikes with opportunities to meet like-minded riders, raising money for the National Autistic Society at the same time.

Initially, this consisted of one ride which just included a few friends that was ridden the opposite way round from Brighton to London to support a different way of thinking, it was supported by The Café Racer store in Brighton and Triumph Woburn.

Out of the success of this event, Supergood was created, now holding up to four large rides per year. The only way is up for the charity, as Paul is already in talks with other riders in the hope of organising events for Norway and Ireland in 2021. 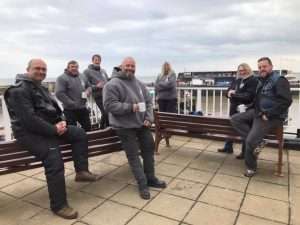 All smiles in their Supergood hoodies.

About two and a half years ago now, Monster Mesh sourced some sweatshirts that could be sold by Supergood to raise extra money directly for the National Autistic Society.

These sweatshirts were a giant hit and Monster Mesh have since become principle sponsor for the rides. In the last year, Mark and the team have been honoured to supply the charity with a giant deck chair, event tent, enamel badges and over 700 items of branded clothing, including; hoodies, T Shirts & beanies. Unfortunately, the pandemic has had an impact on events this year, so the charity has suffered, which is another reason Monster Mesh are keen to keep up their support and helping out in bigger and better ways next year. 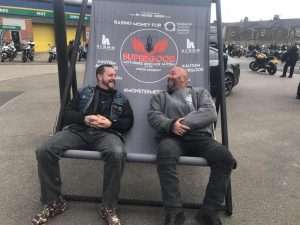 We managed to speak to Paul when he had a free moment from fundraising, to ask how the support from Monster Mesh has helped the charity. Paul shared that through their donations, the charity is able to multiply their donation total two-fold, sometimes even three, taking the total donations up to the 7K mark when the rides are in full swing. “We also benefit from the branded clothing donations throughout the year as people purchase them throughout, wearing them and helping raise awareness for Autism and Supergood.

Without Mark we would not be making such a big impact, both in terms of total funds and awareness. This gesture from Monster Mesh has also really helped me, as the move to becoming a full-time dad supporting Oliver was really super and I love every day, but the focus that the charity also gives me is a massive plus for my own mental health. Whether it’s being able to give away the odd T-shirt or hoodie to someone with autism themselves, or whether its meeting like-minded people that are really struggling, both the rides out and social media presence helps us do just that little bit more.”

The charity might not have been able to get out and about as much as they’d hoped this year, but they certainly aren’t slowing down and have a lot of plans for the year to come. Monster Mesh are incredibly happy to be able to help this wonderful charity and look forward to the rides coming up in 2021! If you’d like to get hold of some Supergood merchandise for yourself or loved ones, you can do so here, with all proceeds going to the National Autistic Society.

Young rider in his Supergood gear